Peshawar is the provincial capital of Khyber Pakhtunkhwa.  It is known as one of the old cities that has seen many regimes in the history.  Peshawar is the link between Afghanistan and Pakistan.  Much of the trade and travel between the two countries is done through Peshawar.  The brave Pashtuns that live in Afghanistan and Peshawar are linked with each other through close ties of religion, culture and trade that spans over the years.

In Peshawar a tourist will find mix of different skills.  Some industries are proudly carrying the fine arts and traditional culture in their products such as carpet making, handicrafts, poetry, embroidery clothing, artwork etc. while other industries are pursuing modern concepts of science and technology such as home industry, urban development etc.

There are many attractive tourist spots in Peshawar where rent a car Pakistan team offer their services.  Some of these are mentioned below: 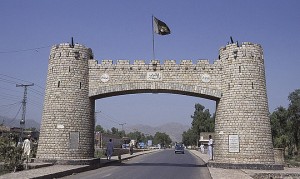 It is the most famous pass that connects Afghanistan with Pakistan.  It is approximately 16 Miles from Peshawar.  It has been the famous gateway between the two countries that has been used in the history for many invasions and migrations. From Pakistan side it starts from the foothills of Suleiman range in Jamrud and extends beyond the Pakistan borders into Torkham in Afghanistan.

Every city and town has markets but there is something special with the Qissa Khawani Bazar.  It carries a historical significance.  As the name goes it is known as the Bazar of Story Tellers.  In old times people used to travel in medium to large groups for trade while going to different countries.  Through Khyber Pass there used to be large caravans of people coming from Central Asian states for trade.  Foreign traders would stay in Qisssa Khawani Bazar and would be entertained by the story tellers with the stories of the land while enjoying the cup of green tea.

It is a magnificent fort built on the high mound in the North Western corner of the Peshawar city.  It was built in the 16 century with a strategic and defensive point of view as it provides a panoramic view of the city of Peshawar and the surrounding valley.

WE ARE STORYTELLERS. BRANDS ARE OUR SUBJECTS. DESIGN IS OUR VOICE.

We believe ideas come from everyone, everywhere. At Car Rental Services, everyone within our agency walls is a designer in their own right. And there are a few principles we believe about our design craft. These truths drive us, motivate us, and ultimately help us redefine the power of design. This is just a sample text widget, add your own in Admin -> Widgets.